Olympic Dreams Made In Setúbal Bay 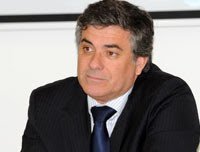 Site of the last six FINA 10km Marathon Swimming World Cup events in Setúbal, the location is well-known to the professional marathon swimmers and their coaches. There will be a total of 94 swimmers – 54 men and 40 women representing 40 countries and 5 continents – vying for the precious 15 final positions.

Liberato explains, “The two races will be broadcast live on the Portuguese television channel Sport TV.” Organizing Commmittee chairperson Maria das Dores Meira added, “It is with immense pride that I see Setúbal and Portugal on the route of more than one hundred athletes pursuing their Olympic dream that this year brings to London.”

The eyes of many will certainly be upon Setúbal on June 9th and 10th…the finish scene from the World Cup race in 2008 is below: