Olympic Marathon Swim In Long Beach, So Cool In LA 2024 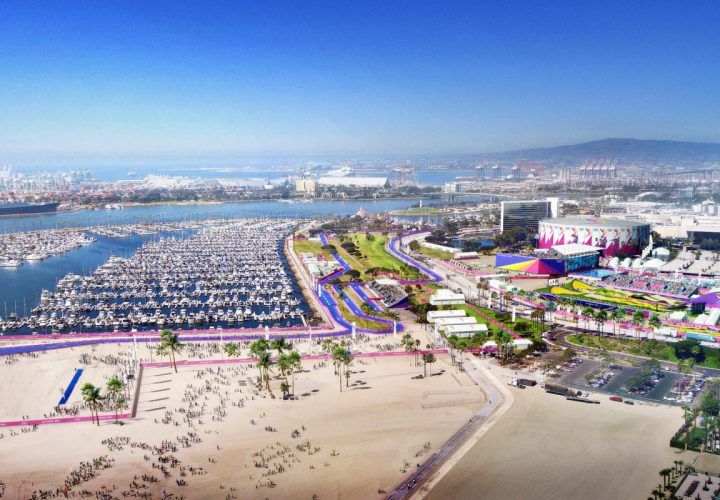 LA 2024, the organizing committee for the proposed 2024 Los Angeles Olympic & Paralympic Games, released renderings of its Long Beach Sports Park that includes the Long Beach Waterfront where the Olympic triathlon and 10 km marathon swimming events will be held.

LA 2024’s city-wide Sports Park innovation enhances the traditional concept of a singular Olympic Park by offering four unique Parks in Downtown Los Angeles, the South Bay, the Valley, and Long Beach. The Sports Park concept ensures athletes, officials and fans from around the world will be able to enjoy Southern California’s diverse geographies and cultures.

Like all of LA 2024’s Sports Parks, the Long Beach Sports Park lies within a single, integrated secure perimeter where all attendees will be able to walk easily from one venue to another in a safe, festival atmosphere. The Sports Parks will include dining, music, sponsor activations, sports showcases and celebration live sites.

LA 2024’s dynamic ticketing model will connect nearby fans with available tickets in real time and will ensure athlete in every sport competes in front of full stadiums with passionate, engaged supporters.

LA 2024 Chairman Casey Wasserman said, “I am excited to share renderings of LA 2024’s world-class Long Beach Sports Park venues, which offer the ideal conditions for athletes, fans and all other stakeholders. By using Southern California’s wealth of top sports, housing and transportation infrastructure, LA 2024 will minimize construction risk and costs, and can spend the seven years leading up to the Games focused on providing all attendees with an unforgettable Olympic and Paralympic experience.”

“I was mistaken and thought that the marathon swim would be held in the ocean water within the Long Beach breakwater,” observed Steven Munatones. “But it appears that the fastest 25 marathon swimmers in the world will be racing in very cool-looking canals where spectators and fans can observe them up close throughout the 10 km. The ambiance of the Sports Park and energy that is expected will be fantastic if Los Angeles wins the 2024 Olympic bid.

The organizing committee and marathon swimming planners did a great job, very innovative, to incorporate marathon swimming into the Olympic schedule. While the dynamic elements of the Pacific Ocean will not be a part of this race, the canals in which the swimmers will race will allow lots of pacing, positioning and drafting. The tactics and strategies should be thoroughly entertaining to watch
.”