Olympic Swimmers Makes A Move On The Beach 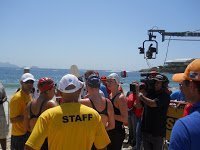 Allan do Carmo of Brazil, one of the best pro marathon swimmers in the world, tried to make a move on the sand during the latter stages of the King of the Sea (Rei do Mar) race on Copacabana Beach, but the men behind him kept afoot.

The entire race was caught by numerous cameras strategically positioned by TV Globo.

The cameras were placed on cranes (see above), up on scaffolding, in the water, under the water, on boats, from helicopters and perched on buildings in order to catch every surge and tactic used throughout the 10K race.