Olympics Stars Onshore And Offshore At The Pan Pacs 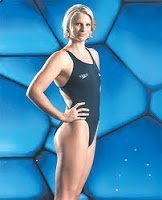 The global swimming community will certainly be glued to the Pan Pacific Swimming Championships between August 18th-22nd with all the intriguing match-ups in the water.

There will be some great rivalries among the men, among the women, between the newcomers and veterans, and in the relay events.

Ryan Lochte vs. Michael Phelps. Rebecca Soni vs. Leisel Jones (shown on left). Australia vs. USA. Kosuke Kitajima vs. anyone and everyone.

But the 5-day event will culminate in a tremendously exciting match-up in the open water – viewed by dozens of Olympic medalists onshore as all the great pool swimmers from the USA, Australia, Japan, Canada, New Zealand, Brazil and other participating countries will cheer on their open water teammates at 9 am in Long Beach, California.

The women (warriors) will swim nearly all-out from the start – and are going to push each other until they drop (off the back of the pack). They are fearless and will bump into each other – hard – throughout the two-hour 10 km race.

On the men’s side, Ous Mellouli, the fantastically fast and fit Olympic gold medalist in the 1500-meter freestyle, will take his open water experience garnered in the RCP Tiburon Mile and try to extend it to 10 km. But Andrew Gemmell, Fran Crippen and world champions Alex Meyer and Chip Peterson, and their Australian, Brazilian and Canadian opponents are not going to let Ous run away with the event. It will be interesting to see how Ous’ tactics differ from the open water tactics used by the greatest pool distance swimmer in history, Grant Hackett, when he faced the top open water swimmers. We know his preparation will be much greater and more focused than his earlier open water swims (see video below).