On April 1st Ryan Cochrane Heads To The Ice 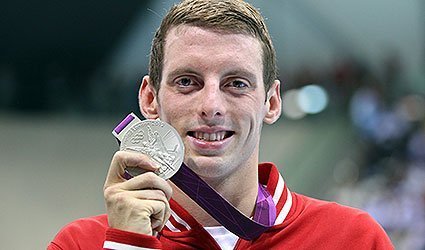 When we saw Ryan Cochrane, the Olympic 1500m silver medalist, swim in the RCP Tiburon Mile, we thought there was a strong possibility that the Canadian long distance freestyler would transfer his aquatic skills and stamina to marathon swimming a la Ous Mellouli.

But it seems that Cochrane is not looking for the warm waters of Rio de Janeiro for another Olympic quest for a medal. Rather, like many Canadians, the allure of the Winter Olympics is too great to ignore.

In a surprise joint announcement by Swimming Canada and Bobsleigh Canada Skeleton on April Fool’s Day, a press release was issued in all seriousness.

According to the press release, the two-time Olympic swimming medalist announced he will retire from swimming to chase gold on the bobsleigh chute. In a rare move for a swimmer, the Victoria native hopes to continue his pursuit of gold in the Canada 1 bobsleigh at the 2014 Olympic Winter Games in Sochi, Russia. 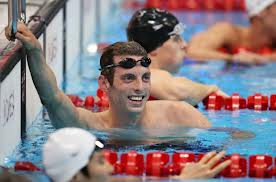 While Olympic swimmers like Duke Kahanamoku, Tim Shaw, Johnny Weissmuller, Matt Biondi, and Brad Schumacher have moved between swimming and water polo, it is unprecedented for a swimmer to join the world’s top-ranked pilot, Lyndon Rush, in a quest to return to the Olympic four-man podium in Sochi. “I have had a lot of great moments in the pool, but I feel the time is right to move on to a new challenge. I have always been attracted to winter sports and have admired bobsledders in particular. This is my chance to leave my mark on both the Summer and Winter Olympics.”

The last Olympic swimming medalist to earn a medal in something other than water polo was Dr. Otto Herschmann who won a silver medal at the 1896 Athens Olympics in the 100m freestyle and then won another silver medal at the 1912 Stockholm Olympics, in the men’s team sabre event in fencing. From the perspective of the Olympic bobsleighers, only American Eddie Eagan was able to cross-over from one sport (boxing gold medal in the 1920 Antwerp Olympics in the light heavyweight division) to bobsleigh (gold in the four-man event at the 1932 Lake Placid Olympics).

Cochrane will trade in his Speedo for a speed suit and spikes as he joins his new teammates for a spring training camp at the Ice House in Calgary to officially begin his journey to the Winter Olympic podium. “We’re ecstatic to add another high-profile summer-sport athlete into the mix of our program,” said Nathan Cicoria of Bobsleigh Canada Skeleton. “We have had great success drawing athletes from other sports and developing them into Olympic and World Champions in our sliding sports. If Ryan can learn how to perform in the cold, snow and on ice opposed to the comfy confines of a pool, there is no doubt he will succeed on our top team.”

Swimming Canada Interim CEO Ken Radford remarked on Cochrane’s retirement, “Ryan’s presence on the national team will certainly be missed. You don’t just find two-time Olympic medalists at any local pool. But if his heart is on the bobsleigh track, we have to respect that.”

Cochrane summed up some interesting reasons for his departure from the water. “For one thing, everyone has been nagging me to wear a swim cap. Yeah it makes me faster, but sometimes it pulls my hair a little. It’s just not worth it. And I don’t even really like getting wet to be honest. I’ve worn my friend’s motorcycle helmet and it’s much cushier. I’m definitely looking forward to that. I’m pretty sure I can pick [the sport] up.”

Come April 2nd, we will see if this is no joke.