On Standby In South Africa For History To Repeat Itself 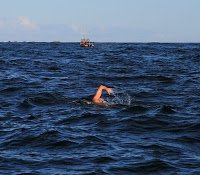 Rarely are marathon swim attempts successful on the very first try. And so it was with Theodore Yach’s attempt from Hout Bay to Robben Island in South Africa.

Today’s attempt was aborted two hours into the swim after ocean conditions deteriorated dramatically. Theodore’s mentor Tony Scallabrino said, “It was like a washing machine out there. He was being hammered by swell and chop so we decided to postpone it until another day.”

Like Captain Matthew Webb after his first attempt in the English Channel in 1875, Ted Erikson after his first attempts in the Farallon Islands in 1967 and Michelle Macy after her first attempt in Alaska’s Clarence Strait, history tends to repeat itself on land and in the open water: success follows initial failure. Theodore vowed to continue preparing for his dangerously icy 35K swim to Robben Island right through the middle of Great White Shark territory.

We are standing by to report on history from Hout Bay.