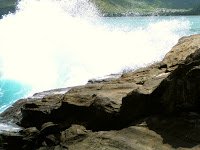 Linda Kaiser reported that Stephen Redmond left Molokai Island at 6 pm on Saturday night and arrived on Oahu at 4:30 pm on Sunday, a victorious 22 hour 30 minute battle with the Molokai Channel.

It was tough going. During the first part of his channel challenge, Stephen enjoyed good conditions, covering 10 miles in less than 5 hours 30 minutes. But then he had to dig deep as the conditions deteriorated by mid-channel.

“I said a couple of prayers for protection and plunged into the channel. We made great headway for the first two hours covering around six miles [in the] warm and very salty water. We were swimming into the night. As darkness came on [so did] stars in the sky. The mermaids were singing (humpbacks whales). When my light caught the jellies and other sea creatures beneath me, it was like a scene from a Star Wars battle scene. You could not tell what was with you or what was near you.”

Then the weather changed and his worst fears came for the same thing happened on his attempt last year. “I could sea the boat being flung from left to right. I have come to the conclusion that the Molokai does not like me.”

Stephen admits that it was grim. “I do not normally want to know the time, but after a few hours in daylight I asked my skipper how we were doing. We had been in 13 hours [but] still had 8 miles to go. Molokai was exacting a huge demands from my body. Knowing my wife was waiting onshore and worrying was hard. You wonder why you do it stop and go that little bit further over the edge and discover the will to complete.” And that he did.

He arrived on Oahu, clinging to China Walls after being battered up against it. “There was always huge doubt surrounding this swim,” admitted Stephen. “I weighed up and discussed all the pro and cons with my Linda Kaiser in Hawaii, a legendary channel swimmer who has lived [in Hawaii] all her life. Arriving In Hawaii, the weather and my body being in bits after the Cook Strait swim put everything in doubt.”

Before his swim, Stephen was a bundle of nerves. “After carbo-loading all day Friday, I felt terrible due to the combination of nerves and [wondering] if the weather hold. I was a wreck. I tried to rest on the short flight over to Molokai, but it was no good so just kept repeating the short mantra I would use during the swim.”

Stuck between two big rocks in a very hard place, Stephen did what he does best. He put his head down and stuck to his plan. But the swells in the middle of the biggest body of water on the planet were a legitimate 8 feet high and the wind was gusting at 20 – 25 miles per hour.

As he got closer to Sandy Beach, the best place to finish and the straightest course point-to-point, Stephen simply could not battle to get across the ‘Ledge’. That hurt big-time. Struggling mightily and weakened from his earlier Cook Strait swim, Stephen was not able to make any headway into the beach.

At a critical junction where success and failure were balanced on the razor-thin decision-making of his crew, Stephen was not getting out, but Mother Nature was seemingly not his ally. But his crew decided to just let him go with the prevailing current and watched helplessly as he was swept towards the Diamond Head volcano. Incredibly for those familiar with the lay of the land, Stephen was swept completely around Hanauma Bay and towards the southeastern shores of Oahu. “The waves were pounding the coast of Oahu too big for him to get in anywhere along Hanauma Bay,” recalled Linda. If he would miss this last point, the next piece of land was the Kauai, impossibly hundreds of miles in the distance.

But Stephen is about to step into history for a reason: the Irish marathon swimmer kept his stroke up and continued against all odds. With Diamond Head within sight, Stephen finally struggled towards Maunalua Bay and grasped the dangerous ledge called China Walls (see above) where waves crash spectacularly against the boulders of the treacherous cliffs. Dozens of people, including Linda, witnessed the feat that was without parallel in the Molokai Channel.

Linda recalls, “With the waves at Hanauma, the goal was always China Walls. It was very calm around the point and in Maunalua Bay where he landed. I can see China Walls from my house, so when the boat asked what to do, we came up with the plan. It was up to Stephen to keep swimming. He is a very remarkable human and I know that quit is not in his vocabulary.”

Stephen encountered sharks and whales in the channel. While he swam without a shark deterrent of any kind, the whales did swim under and around him, serenading him. With six of the seven channels completed in his Oceans Seven quest, Stephen is on the brink of history with only the Tsugaru Channel remaining.