One Of The Greatest Olympic Stories Ever Told 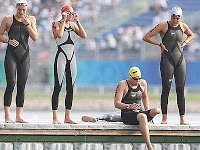 One of the greatest Olympic stories ever told was the road to Beijing by Natalie du Toit, the South African amputee who fought back from adversity to qualify for the 2008 Olympic 10K Marathon Swim.

The courage, the tears and the passion shown by Natalie on her road to Olympic glory was inspirational and genuine.

But what makes Natalie so unique is that she honestly believes everyone can do what she does and what she does is not special. She does what she loves and she puts in 100% into her career.

With the 2012 Olympic 10K Marathon Swim qualification coming up in eight months, we look forward to watching another inspirational road to Olympic success for Natalie.