One Step Closer To Shanghai And London

Andreas Waschburger of Germany topped the international field at the FINA 10KM Marathon Swimming World Cup in Cancun, Mexico. His victory enabled him to take one step closer to becoming Germany’s second representative (along with Thomas Lurz) at the 2011 FINA World Swimming Championships, the qualifier for the 2012 Olympic 10K Marathon Swim. 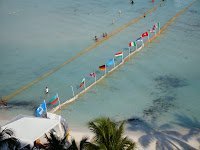 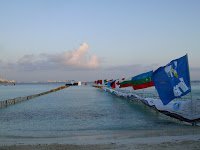 The shallow-water, tropical blue entrance to the Cancun race was dramatic and lined with the flags of the nations that were represented by the pro swimmers.