One Stroke, One Year At A Time 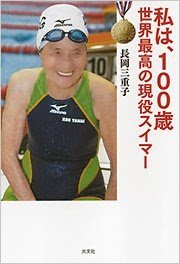 But the Japanese centenarian is also more than five times as old as the American Olympic champion.

Both the 18-year-old American and 100-year-old Japanese are turning heads with their speed and stamina.

While Ledecky can swim a 15:28 in the 1500m freestyle, the Japanese woman is the embodiment of the healthful and graceful aging of society in Japan. “I want to swim to 105 if I live that long,” she told the Japanese media.

Japan is faced with an unprecedented aging phenomenon as the oldest society in the world. There has been nothing like this kind of aging trend in the annals of recorded history. But one proven way to combat the ravages of aging is exercise. And none is better than swimming – especially as one ages.

Find a pool in Tokyo, go to a coastline in Okinawa, head towards a fitness center in Osaka, and you will see older Japanese people swimming and exercising in the water.

They swim slowly for sure, but they are clearly working out and trying valiantly to stay fit. It is not bad for a country with over 59,000 people who have reached the age of 100 – or 46 centenarians per 100,000 citizens who are 100 or older.

Nagaoka is showing how it is done: one year and one stroke at a time.

For another article on swimmers who age gracefully, read here (Feeling Young, Getting Younger In The Open Water).