Open Water Is A Different World 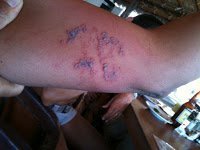 Nora Toledano and her fellow Sea of Cortez swimmers faced challenges that other marathon athletes do not face.

Without a doubt, triathlons are tough as are ultramarathons and long-distance cycling races. The Iditarod is a massively difficult event as are adventure races and other feats of endurance.

But what sport can you be attacked by sharks and zapped by jellyfish after fighting currents, waves and cold-water temperatures? The start, the finish and nearly everything between can be difficult.

Nora’s stings and scars from her latest Sea of Cortez swim (shown above) are just one example.

Penny Palfrey, similarly stung on her swim from Oahu to Kauai, tell of other dangers.

“Negotiating the dangerous, surging ocean breaking onto the huge lava boulders was very difficult and dangerous. I needed to use every surf and swimming skill I have to make my way onto the rocks before turning around and heading back out into the ocean without being smashed against the massive boulders, many of which were under the surface of the water and impossible to see. Only the foaming white water around them as the swells surged against them gave away their presence.”

Can you imagine that feeling…and then having to swim another 72 miles?

Can you imagine getting stung – see above and this video here– then having to swim on?