Open Water Is The Template

In the US Masters Swimming forum, one supporter of the sport observed, “Open water is the template, pool swimming the unnatural imposition.”

While mankind has been swimming in the open water for millennium, pool swimming does seem like relatively a recent luxury.

This observation reminded us of a wonderful book on Olympic swimming. 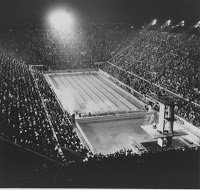 Renowned coach Peter Daland, with the assistance of Phil Whitten, authored a wonderfully entertaining book with many original photographs called The History of Olympic Swimming. Volume 1: 1896-1936.

Volume 1, published by USA Swimming, can be greatly appreciated by open water swimming enthusiasts as the book covers the swimming events of the Olympics from 1896 to 1936.

In this early era of the modern Olympics, the swimming events were essentially open water races held in the Aegean Sea in Greece, downstream in the Seine River in Paris and in a man-made lake in St. Louis, Missouri, USA. As Peter and Phil write, “The water in each of these primitive courses was extremely cold and unclear.”

The 178-page hard-cover book details each swim with many previously unseen photographs, unknown information on the swimmers and pre-race conditions of the Olympics, and includes a comprehensive listing of the preliminary and final times of all competitors.

Something that modern-day marathon swimmers can appreciate, the authors factually describe the competitors overcoming wind, waves, tides, currents and cold water to claim their Olympic victories.

The pools that were constructed for the subsequent games are also described in a manner that befits the black-and-white photographs that are abundant throughout the book. The authors write about the 100-meter outdoor pool, set inside the Olympic stadium for the 1908 London Olympics as containing “unfiltered water [that] was dark and cold.”

The 100-meter outdoor course for the 1912 Stockholm Olympics was “constructed in the cold water of Djurgardsbrunnviken, a waterway open to the sea just outside of Stockholm.”

Some of the Olympic heroes are also inductees in the International Marathon Swimming Hall of Fame which helps make this a great read for both pool and open water swimming enthusiasts who appreciate a well-researched and clearly written historical book on the sport of swimming.

The must-have book is available through USA Swimming here.

The upper photo of the 1936 Berlin Olympic pool is the property of IOC Olympic Museum/Allsport/Getty Images. Middle photo is from the 1900 Paris Olympics and the lower photo shows the swim start at the 1904 St. Louis Olympics.

So while the swimming and sports community think of open water as something new, history tells us otherwise.