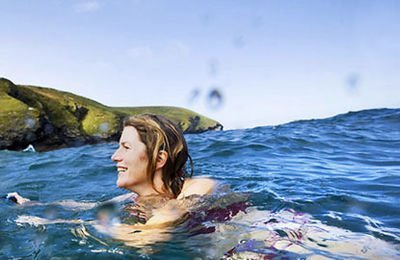 All kinds of open water swimmers from various walks of life were honored during this weekend’s International Swimming Hall of Fame Honoree Enshrinement ceremonies in Santa Clara, California.

The weekend kicked off when Kate Rew received the Paragon Award for Recreational Swimming.

This recognition makes complete sense with the growth and celebration of wild swimming, largely encouraged by the writings, offerings and data sharing of Rew and Wildswim.com.

The Paragon Awards are presented to individuals or organizations for their exceptional contributions to aquatics and are presented by the Pentair Corporation. “The Paragon Awards are given each year to individuals who have made an impact in the aquatics industry whether in the water or out. The distinctive recipients of this year’s Paragon Awards, are perfect examples of what it means to push forward with an ultimate goal in mind and to achieve that goal,” explained Jim Drozdowski, Institutional Aquatics Sales Manager for Pentair Aquatic Systems.

The Buck Dawson Authors Award was given to Karlyn Pipes and Tito Morales for their book, The Do-Over. The award is presented to the author of an aquatics-related book for which the book’s content has had a profound educational or entertaining impact on the aquatic disciplines or population in general.

Tonight, the ceremony is the annual gathering of many of the greatest aquatic athletes, coaches and luminaries with heartfelt speeches and dramatic introduction videos are shared with those from the open water swimming, pool swimming, diving, water polo and synchronized swimming communities.