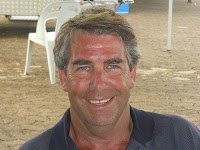 The sport is in good hands when race directors have hands-on experience in the sport of open water swimming.

There are hundreds of others; but there are few like the hardened Colin Hill, the Marathon Swimming Technical Operations Manager for the London Organising Committee of the Olympic and Paralympic Games for the 2012 London Olympics.

To describe Colin as hard-core would not give him justice. The man is diamond-cut; a masked crusader with kryptonite in his veins; intense and as passionate as they come. 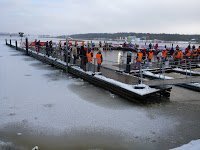 “I go through the winter now swimming every day I can. I kept swimming between 800 meters to a mile in under 6°C (43°F) and down to ice water. I took part in the Winter Swimming Championships in Latvia [a 450m race where he became the world age group champion]. The water is now 9°C (48°F), so I’m swimming between 2 km and 3 km in the morning.

Mind you it must be getting warmer as a few triathletes have appeared like daffodils in the spring at the Serpentine fully wetsuited up
.”

From Snowdon, the highest mountain in Wales, Colin explains his 1.4 km swim in 6°C water:

From the Serpentine in Hyde Park where there was too much ice to swim safely. Colin explains, “The ice is pretty sharp and you get a nasty cut that doesn’t bleed until you warm up.”