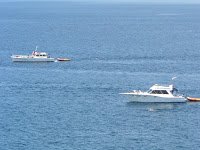 50 local swimmers set the world non-stop open water swimming relay record in Lake Cane in Orlando, Florida, U.S.A. only a few years ago. Then it was two relay teams of international marathon swimming superstars, including Penny Palfrey, Michelle Macy and Julie Bradshaw, that upped the ante in Lake Taupo in New Zealand (shown on left).

The Night Train Swimmers of San Francisco then took two valiant attempts in the Gulf of Mexico that ended with terrible jellyfish stings.

Undaunted, the Night Train Swimmers continued their quest in fresh water and set a new non-stop six-person relay record in Lake Powell that sits between the American states of Arizona and Utah.

Then taking up the challenge another notch, an international team of six hardened swimmers upped the distance a bit further in a 12-way crossing of Windermere in the Lake District of England.

But the current standard remains with the men of the Ventura Deep Six who swam non-stop for over 4 days over 202 miles of Pacific Ocean along the California coast and the Camlough team of over 200 swimmers who swam constantly for over 9 straight days in Ireland.

And now with the Night Train Swimmers announcing their six-person attempt to break the 300-mile mark with a 339-mile effort down the California coastline from San Francisco to Santa Barbara, new goals are constantly being envisioned by teams around the world.

A Russian team of 50 hardened swimmers, under the leadership of the Universal Marathon Cold Swimming Association is currently organizing a marathon relay swim wth a goal of swimming 680 km (422.5 miles) in the 4-7°C (39-44°F) waters of Lake Baikal (all non-wetsuit).

“That is very cold,” said Jim McConica of the Ventura Deep Six in an understatement. “The more competition, the better. It keeps open water swimming alive, in the news, and makes challenges all the more worthwhile,” remarked Thomas Noblett of Windermere fame. “We will be watching with interest, I have already fired up our team to up our game and get prepared.”