One example of the Australian sense of urgency can be seen here at the Ocean Shores Police Department website.

Other examples include the ocean swims in Bondi Beach and the Manly Life Saving Club (old photo shown on left) where the safety personnel has officially saved over 10,000 lives. No individual has drowned at Manly Beach while its Club members have been on duty. Currently, the Manly lifeguards save about 200 lives per year. 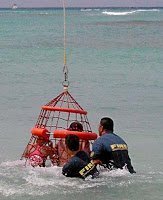 Likewise, in the US, the capabilities and fast action of the Honolulu lifeguards (Ocean Safety and Lifeguard Services Division) were evident during the 2003 Waikiki Roughwater Swim (upper photo shows start of annual event). During the 2003 event, hundreds of swimmers were rescued when powerful currents were too much for most of the swimmers. Of the 1,055 swimmers who started, only 356 finished including, remarkably, 71-year-old Jim Gaughran who finished in 1:51:07 and 72-year-old Graham Johnston who finished in 2:07:30.

All the other swimmers either had to turn back to the start, were helped back to shore by fellow swimmers or were rescued by the US Coast Guard, Honolulu lifeguards or Honolulu Fire Department personnel that collectively reported saving at least 267 swimmers.

One hero was Ramses Rosa who saved more than 100 swimmers on a rescue craft with his partner using a rescue board.

They saved 4-5 swimmers at a time, taking them to shore and returning for more than 20 trips.

Kenny Rust, an experienced ocean swimmer and captain with the Honolulu Ocean Safety and Lifeguard Services Division said, “It was total chaos out there,” which was echoed by the race director Ted Shepard. “The current was very strong and unexpected and had a negative impact on most of the swimmers.”

For the 9 am race start, 17 large bright orange race buoys were set along the course of Waikiki, but when the race began, the National Weather Service issued a small-craft advisory and a high-surf warning. Nature was too strong for most of the swimmers, a large majority who had done many ocean swims before.

When a swim begins, we always must be prepared.