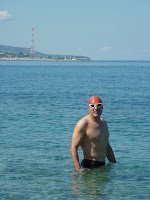 After hearing about the Hellespont swim that marked the anniversary of Lord Byron’s swim, Colin Hill of Great Swims and Outdoor Swimming Society stalwart John Fenemore started to plot and plan for a 10-person swim from Sicily to Italy. “Looking at the history of the area, it sounded very exciting,” recalled Colin. This is his first-person recollection of the swim:

Scylla and Charybdis were two sea monsters of Greek mythology noted by Homer. Later Greek tradition sited them on opposite sides of the Strait of Messina between Sicily and mainland Magna Graecia (southern Italy).

Scylla and Charybdis were said to be located close enough to each other that they posed an inescapable threat to passing sailors; avoiding Charybdis meant passing too closely to Scylla and vice versa.

In October, we managed to converge at the house of our swim guide Giovanni, a local swim champion in his day, in Sicily. After a briefing, we met Giovanni the following morning at the port of Scilla, a beautiful fishing village overlooking the blue clear waters of the Stretto di Messina in Italy.

Giovanni’s organization was excellent. On the boat journey across to our starting point in Sicily, we munched on Giovanni’s wife’s cake (a breakfast of champions) specially prepared for our swim attempt, watched dolphins and then worryingly looked at some rather large whirlpools.

The group was split into predicted times for a 3K (3K is the shortest point of the crossing), with the fastest swimmers going off last with 3 swimmers per support boat. I was paired off with a local, who was dressed head to foot in neoprene, mask and fins. He told me he would go as fast as I needed him to, but after 100 meters he had barely moved from the start. Giovanni dispatched another boat to look after him and I was off. Lovely swim in 26°C (78.8°F) water that I made it in under 50 minutes. The next group came in around 1 hour and 10 minutes and the last group of newbies to the open water swimming a steady breaststroke made steady but slow progress with the conditions getting choppy and current stronger. After a wonderful effort they all made the crossing in under three hours.

All in all it was a wonderful experience with lots of pasta and fresh fish, fine wine and warm clear water to swim in.