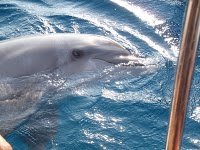 Open water swimmers are uniquely positioned to view and interact with Mother Nature in a manner that other endurance athletes do not do.

Gadi Katz of Israel reported that a dolphin escorted his group in the Red Sea, a phenomenon that occurs all over the world on many marathon swims.

Linda Kaiser, Harry Huffaker, Penny Palfrey and many others have had close encounters with sharks – large, menacing sharks – and jellyfish and Portuguese Man-o-War of all kinds.

Below Miyuki Fujita interacts with a marine bird on her Suruga Bay marathon swim. On the other side of the Pacific Ocean, Nick Adams was followed by a bird (7 minutes into the video).