Open Water Swimmers Are Left With A S.C.A.R. 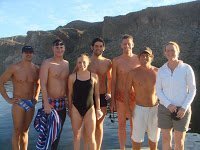 Open water swimming in the desert is like going to the moon or winning a Nobel prize. Few people imagined it and even fewer achieved it.

But times have changed.

What was previously impossible is now deemed possible, especially in the open water swimming world.

Man-made desert lakes have long been an Arizona open water swimmer’s dream. As more swimmers discover the availability of these lakes year by year, the state of Arizona is becoming another open water oasis in the American Southwest.

Hardcore swimmer and attorney Kent Nicholas from Mesa, Arizona (shown above) is one of these pioneers who is helping develop more events and draw more swimmers to open water swims in the desert.

Last week, eight swimmers took part in the first half of the S.C.A.R. Swim Challenge. Two days later, the group of desert swimming marathoners traversed the length of two lakes, approximately 18 miles, in the Phoenix area. They will return to cross two more when the series resumes on May 18th.

S.C.A.R., which stands for Saguaro, Canyon, Apache and Roosevelt Lakes, is the brainchild of Nicholas, the desert dwelling swimmer from Mesa who created the series as a means to train for the Manhattan Island Marathon Swim in June.

Nicholas swims year round in Arizona lakes and with the Mesa Aquatics Club. As one of the founder of the open water group, Narwhal Overboard, he completed the first stage of S.C.A.R. with renowned marathon swimmers Janet Harris and David Barra.

After completing the nine-mile distance in Saguaro Lake on Friday in less than four hours, Barra described the experience, “The banks of the river/lake are lined with sage and saguaro cacti that alternate between open areas and tall canyon walls rising straight out of the water. The rugged beauty of this lake is breathtaking, and I was, at times, distracted…wanting to focus my attention on one feature or another. Still, Janet and I podded well together, stopping briefly every 30 minutes for a feed.”

Harris similarly waxed poetically on her blog, “Canyon Lake lived up to its name–the walls rose up dramatically on both sides of the lake all along the twisty route from dam to dam. We even saw a big-horn sheep along the way.”