Open Water Swimmers Are Not All At The Same Level 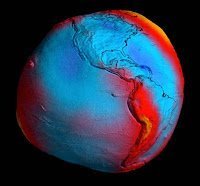 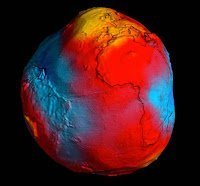 New technologies (geoids on left) are enabling scientists to understand better how the world’s oceans are moving and how the oceans redistribute the heat from the sun around the world.

What these geoids show is the shape the oceans would adopt if there were no winds, no currents and no tides. Gravity is strongest in yellow areas; it is weakest in blue ones.

While common thought is that the oceans are all at the same level; in fact, a swimmer off the coast of Europe (shown in bright yellow in the above geoid) can swim 180 millimeters “higher” than a swimmer in the middle of the Indian Ocean (represented by blue in the geoid) and still be on the same level plane.

This is the trick gravity plays on Earth because our planet is not a perfect sphere and its interior mass is not evenly distributed.

Professor Reiner Rummel, the chairman of the Goce scientific consortium that developed this new source of knowledge, explained, “Usually, heights in the UK, are connected to one benchmark which is connected to mean sea-level, which might be measured at Liverpool, for example. The French do the same, the Australians do the same and the Chinese do the same – but mean sea-level differs from one country to the next. Now, with Goce, we can unify this so that we don’t get the sort of surprises we had when they built the Channel Tunnel and discovered a half-metre offset between the UK and France.”