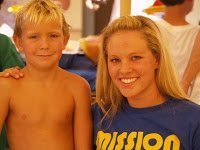 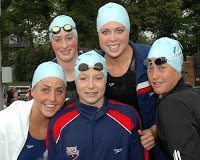 With Olympian Chloe Sutton (shown above) of the Mission Viejo Nadadores swimming out of her mind despite being in heavy training and Greenwood Memorial‘s Eva Fabian (middle on left) swimming well in the pool after performing well in the Argentina FINA 10K World Cup, the two young women are fast barreling towards a fantastic battle at the USA Swimming National Open Water Swimming Championships in Long Beach, California in June.

The 10K race at the 2011 World Swimming Championships in Shanghai will serve as the first qualification race for the 2012 London Olympics 10K marathon swim.

25 of the world’s best marathon swimmers are going to treat the estimated 100,000 standing-room only crowd in central London’s Hyde Park and the live global television and online audience to two hours of strategy, tactics, phenomenal aerobic conditioning and an all-out mass sprint to a dramatic finish.

Home of the English Channel, birthplace of the British Long Distance Swimming Association and land of the Champion of Champions Race, Great Britain will be a wonderful host to the Olympic 10K Marathon Swim. And the expectations of the British people will fall on the shoulders of the extremely talented British swimmers.

Held in the Serpentine in Hyde Park in London, the setting will be unbelievably magical for the world’s best. But the first step to London will begin in Shanghai in July 2011.

The 25 men and 25 women finalists in London’s Olympic 10K Marathon Swim will comprise of the following:

o The top 10 highest placing men and women at the 2011 World Championships in Shanghai
o 1 man and 1 woman from Great Britain as the host country
o 9 men and 9 women from a second qualification swim to be determined
o There will be a minimum of 5 male and 5 female continental representatives (i.e., 1 man and 1 women per continental region: Africa, Asia, Americas, Oceania and Europe)
o A test event – and possibly the second qualification swim – will be held in London on August 13-14, 2011, possibly as part of the FINA World Cup.

So as Chloe and Eva battled it out in Ohio, they will renew their rivalry in Southern California and perhaps onwards to Canada, Shanghai and London…or will the USA be represented by someone else? It is going to be exciting to watch – and fans will be able to watch up close in Spectator Boats right on the race course itself in Long Beach.