Open Water Swimmers Have A Long, Long Way To Go 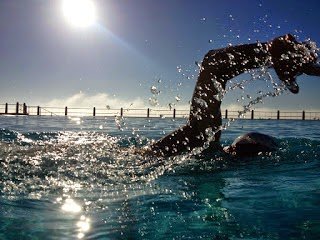 Courtesy of WOWSA, Huntington Beach, California. This summer, 73-year-old Dr. Otto Thaning of South Africa (12 hours 52 minutes) and 70-year-old Cyril Baldock of Australia (12 hours 45 minutes) completed a crossing of the English Channel. The dynamic duo join 70-year-olds Dr. Roger Allsopp (17 hours 51 minutes in 2011) and George Brunstad (15 hours 59 minutes in 2004) as the sole quartet to swim the English Channel as septuagenarians (people in their 70s). But there are hundreds of active marathon swimmers in their 50s and 60s who will continue swimming and will undoubtedly increase the number of channel-swimming septuagenarians over the next few decades. How long can these quinquagenarians (swimmers in their 50s), sexagenarians (swimmers in their 60s), septuagenarians, octogenarians (swimmers in their 80s) and nonagenarians (swimmers in their 90s) keep it up? If pearl divers in Japan are any indication, older swimmers will be able to continue swimming for a long, long time due to their health-friendly lifestyles. Many pearl divers (ama in Japanese) live a rather spartan lifestyle as they repeatedly push their bodies below the surface of cold water. In Kuzaki on Japan’s Pacific coastline, the female divers have been doing this livelihood for decades. Starting in their teenage years, the 70 active ama are between 50 and mid-80s. Throughout the famed Toba region of Japan, the average age of the ama is 72 among the estimated 1,300 women. Open water swimmers, fortunately, have a long way to go. Dr. Thaning was nominated for the 2014 World Open Water Swimming Man of the Year. On a daily basis, heart surgeon Dr. Thaning has insights on the effects of poor cardiovascular health on adults. He also deeply understands the importance of a healthy lifestyle that also maintains a fine balance between family, work and recreation. He is the living epitome of how best to live a marvelously worthwhile life, both on terra firma and in the world’s oceans. After a long career of open water swimming successes and helping others, Dr. Thaning culminated his career in the English Channel by becoming the oldest person to traverse from England to France – a year after canceling an earlier attempt. At the age of 73, he made a trail-blazing 12 hour 52 minute crossing, far faster than the average swimmer several decades his junior. Cyril Baldock was nominated for the 2014 World Open Water Swimming Performance of the Year. Not only did Baldock become one of the oldest channel swimmers in the world, but he also completed his swim-for-the-ages extremely quickly. This was Baldock’s second record in the English Channel; the first came in 1993 when he was a member of the four-way Sun Rice Australia relay that took 42 hours 11 minutes to swim between English and France 4 consecutive times. 29 years after his first crossing, Baldock swims like a man one-third his age. Humorous, cheerful and optimistic, the life member of Bondi Surf Bathers’ Life Saving Club and 7-time national surf-swim and rescue/resuscitation champion is a man comfortable in the sea. Copyright © 2008 – 2014 by World Open Water Swimming Association