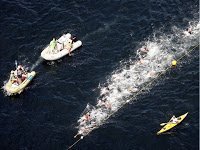 In large mass participation races, high profile races or professional marathon races, the physicality between competitive athletes can get out of hand.

Ziplining, elbowing, veering off, cutting off, swimming over the legs or back of another swimmer, or impeding in some way can occur at the start, around turn buoys, along a straightaway, near a feeding station, or near the finish.

The physicality can get out of hand unless there is a strong and visible presence of competent and objective referees who are ideally positioned along the course or in official boat and are supported by a second set of eyes.

These photos show the top athletes at the Travessia dos Fortes, a major race in Rio de Janeiro, and its referee and safety officer Ricardo Ratto who uses his whistle and hand signals judiciously to maintain order within the top ranks.