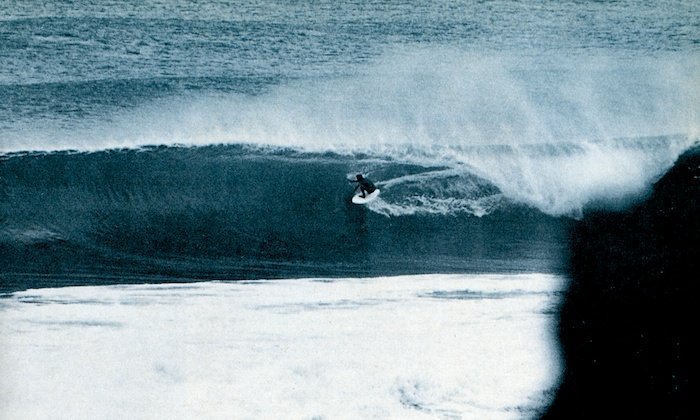 Surfing is included in the short list of new sports that are currently under consideration for inclusion at the 2020 Tokyo Olympic Games.

As the International Olympic Committee (IOC) hopes to host hip and appealing sports to younger generation of fans, sports like surfing climb up the list of Olympic inclusion. A recommendation to the IOC will be submitted this September.

While the marathon swimming event will be held in the totally flat Tokyo Bay, the surfing competition at the Olympics could be held in one of the Izu Islands off the coast of Tokyo where open water swimming and surfing are absolutely marvelous.

The Izu Islands (伊豆諸島) are a group of volcanic islands where the surfing and open water swimming are marvelous. In particular, Nii-jima (新島) has an elongated shape, measuring 11 kilometers (6.8 miles) long by 2.5 kilometers (1.6 miles) wide, made of rhyolite lava that gives the island its famed white cliffs and white sandy beaches.

“Swimming along the coasts of this island is outstanding,” says Steven Munatones. “There is one particularly straight 6.5 km stretch on the eastern coast where the water is clear and warm, but the wind and waves can make any point-to-point swim an enjoyable challenge. On some days, the currents can be strong and the surf can be magnificent, reminding me of various other surfing locations from South Africa to Hawaii. The beach has these tall volcanic cliffs overlooking the coast and it is a marine reserve so there is plenty of marine life and always something to look at when you are swimming.”

Nii-jima, formerly a prison island, is serviced by a number of ferry boats and short flights from Tokyo and other locations on Honshu.

For more information on the decision-making process governing the inclusion of additional Olympics sports, visit here.