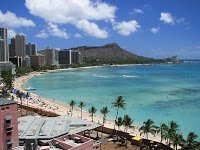 Waikiki Beach is the shoreline fronting Waikiki Bay and is a famed year-round open water swimming location. Waikiki, which means ‘spouting fresh water‘ in the Hawaiian language for springs and streams that fed wetlands that once separated Waikīkī from the interior, is a neighborhood of Honolulu, Hawaii on the south shore of the island of Oahu in Hawaii, U.S.A.

Waikiki Beach is site of the annual Waikiki Roughwater Swim, the well-known 2.4-mile open water race held on Labor Day in September and the inspiration behind the swim leg of the Ironman Triathlon.

Numerous open water swimming competitions and marine sports events are held throughout the year. The summer open water swimming season in the U.S. is coming to a climax. One of the great events is the Waikiki Roughwater Swim, now in its 39th year. Traditionally held on Labor Day, the 2.4-mile Swim, starts at one end of Waikiki Beach, under the foot of Diamond Head Volcano, and finishes at the other end at the Hilton Hawaiian Village.

Framed by the Diamon Head volcano on one end and a line of resort hotels on the other, swimmers can enjoy a wide variety of conditions in Waikiki from glassy flat calm conditions to raging marine anger if high surf and strong currents appear.