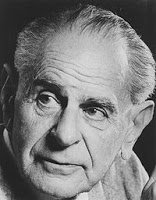 Sir Karl Raimund Popper was a professor at the London School of Economics and is considered one of the greatest philosophers of science of the 20th century.

We believe he precisely and inadvertently described the difference between pool swimming and open water swimming when he described a world that can be divided into two categories: clocks and clouds.