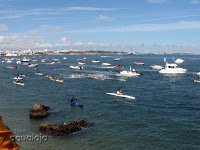 The 22-member FINA Bureau met in Dubai on December 12-14, 2010 and made many decisions on a variety of topics for the aquatic disciplines it governs.

Among the many decisions decided and announced by the FINA Bureau, two were noteworthy for the sport of open water swimming:

1. Portugal was awarded the bid for the 2012 Marathon Swimming Olympic 10K Qualification Event. The event will be held in Setúbal, site of the annual Setúbal International Bay Swim Marathon, a leg on the FINA 10K Marathon Swimming World Cup circuit (see video below courtesy of aqualoja.net.

Above photo of the Setúbal International Bay Swim Marathon is courtesy of aqualoja.net.