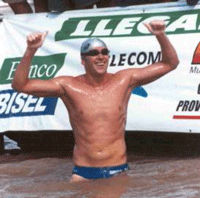 The first race on the 2011 FINA Open Water Swimming Grand Prix circuit will kick off in Rosario, Argentina at the Maratón Acuático Internacional Ciudad de Rosario. With races between 15K and 88K where men and women start together, the series is the most formidable marathon swimming circuit in the world.

22 men and 16 men including many of the world’s fastest and most durable marathon swimmers will start the 11-race circuit in Rosario this Sunday.