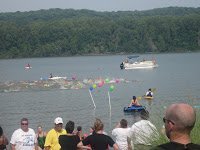 Race Director Randy Scherer conceived the race as a fund raiser for the North Oldham High School swim team. It was originally planned as a preview race for the Louisville Ironman to give triathletes experience in the Ohio River. But, Randy points out, “Open water is starting to catch on in the area. When USA Swimming wanted to push open water for the age group levels, the multi-format race was born.” 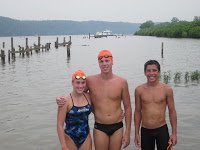 The setting in Cardinal Harbour was ideal for the event – scenic, spacious, and safe. The homeowner’s association agreed to accommodate the race. “Homeowners-turned-spectators watched the race from their backyards, while other spectators lined the dock and shore. The arrangements were simple but effective, a model for open water organizing.”