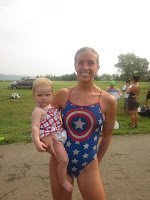 “This is a cool group. Ashley is super-conscious about safety, as well as a very welcoming and likable person and coach. She is especially good at teaching sighting technique. There are two large lakes with numerous entry points plus the Cumberland River. There is a large, organized and strong athletic community in the area.”

The sun is barely above the horizon each Sunday morning when 30-40 aficionados gather at the Hickory Creek Marina on Percy Priest Lake, east of Nashville. The lake is a meandering series of waterways, inlets and coves offers a great location for a solid open water workout. 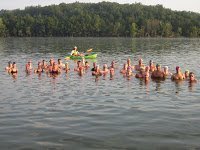 At Excel Aquatics, Whitney caters to all levels of open water swimmers.

Sunday workouts include a 400-meter warm-up followed by a 1.5-mile swim. In addition, Whitney conducts beginner trainings for those new to the sport, teaching sighting, breathing and swimming with a pack.

“The focus on safety in this group is impressive. Whitney continually stresses the importance of sighting for boat traffic and reminds swimmers of the need to be visible by means of bright swim caps. Kayakers escort the group with Excel coach Dee Davis paddling along, checking on newcomers and guiding swimmers to the safe side of the route. Several triathlete members wear safety belts while training for their confidence and safety.”

Whitney explains, “Cramping in open water can be fatal, so having the safety belt gives them some confidence in the open water. Aside from the safety belts, we also use the buddy system. People pair up or form groups based upon speed and try to stick together during our swim. If anything were to happen to one of the swimmers, their buddy is there to help them.”

Initially there was some resistance from the marina to the group’s presence and the use of the public lake was not a given, but Ashley contacted lawyers, the Corps of Engineers for Percy Priest Lake and the Park board and eventually obtained permission and a permit to swim in the Percy Priest lake Sunday mornings from May to September.

In the Nashville area, Alexander reports there are four weekly groups that meet on Sundays (see above), Tuesdays (before work), Wednesdays (before work) and Thursdays (after work) from April – October when the water is warm. “All the groups are friendly and welcoming and they all include a wide range of experience and ability.” 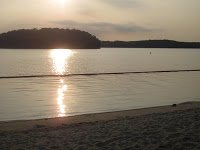 On Tuesday mornings, Dan Powell of Endurance Sports and Rec organizes an open water training swim at Anderson Road Beach. The orange boom that forms the public swim beach creates a ½-mile loop. Sessions are popular in the weeks leading up to major triathlons, but open water swimming diehards show up each week to enjoy swimming at sunrise.

North of Nashville, triathletes and swimmers have been gathering for the past five years on Wednesdays in Old Hickory Lake for an early morning workout. The swimmers are variously affiliated with – ACME Multisports, HEAT (Hendersonville Endurance Athletic Team) and YMCA. Before the sun is up, swimmers launch from the Saundersville Boat Ramp to do laps on a 400-meter course in a small, protected cove. Many arrive on foot or bicycle to round out their training. At least one group member volunteers to watch from the dock for the duration of the swim, serving as lifeguard.

The group is an extension of the master’s program at the YMCA. ACME’s Mark Evans says “When it is warm enough in April – before triathlon season begins – people want to swim outside, try out wetsuits, etc. Our racing season starts about the end of April and continues until the end of September. We have all kinds of folks that come out and swim. There are a few local races (late May, late June and late July) and we have many people getting ready for their first race or first open water swim. We find that many people think they can swim fine in the pool and think it will equate to swimming the same in open water. They just have to swim in the water and get used to it. It is better for them to come to practice before they get to the race for the first time. We just want people to get used to swimming in open water, plus they find they like swimming outside as opposed to the monotonous wall to wall swim in the pool.”

As Alexander reports, “At the rate open water swimming is growing in Nashville, there will soon be a different swim for each day of the week.”