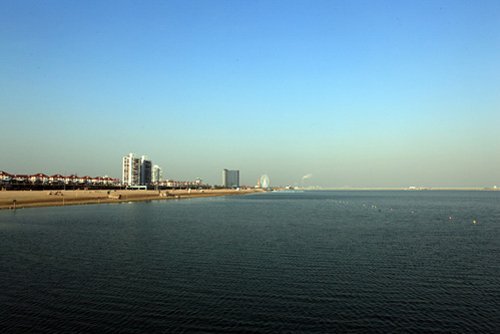 The world’s fastest open water swimmers have gathered in a hotel near Jinshan City Beach in Shanghai for next week’s World Swimming Championships. With the Olympic 10K Marathon Swim qualification race on July 19th (women) and July 20th (men), the Olympic dreams of 10 women and 10 men will be realized – and the others will be sorely disappointed.

As Shanghai literally means the “Upper Sea” in Chinese, the world’s best will be racing in a man-made enclosed area of the East Chinese Sea along a 1.7K artificial beach.

With relatively slow water flows and low tides, the water is reportedly clear after being filtered with physical and biological sedimentation.

The Daily News of Open Water Swimming will be reporting frequently about the athletes, atmosphere, operations and events of the World Championships: