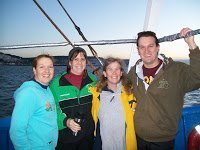 Tom Keller, Michael Chase and Jon Ennis of the Dolphin Club in San Francisco kicked off something unusual in August: they swam an individual medley in the open water when they completed their Golden Gate Medley Swim – about 1 mile of each stroke for 2 hours and 20 minutes.

It did not take long for the marathon swimming community to kick up the Dolphin Club members’ medley challenge up a notch. A big notch.

The Julie Bradshaw International Medley Relay did their own 11 hour and 29 minute version in the English Channel in September.

Mike Monello reports, “…as we steamed down to Shakespeare beach, the Doctor and her companions prepared themselves, a pleasant day had been forecast and the full swim flotilla was out. At 6:41 Susan entered the water at Shakespeare beach, to ensure that the relay is recognised as a Medley attempt the swimmers are swimming in correct international stroke order…Susan gives us a good start and a smooth changeover see Pete breaststroking his way south. With a following swell Pete goes in for a bit of body surfing and at 08:41 Julie takes over with butterfly…and shows the dedication and strength needed for such a task. Kim…takes over from Julie and quickly takes us into the South West Shipping lane…[where] a 360° ship count gives a total of 26 ships within view.”

“…we now have a beautiful day, blue sky and slight seas, there is almost no flood tide…we enter the Separation Zone at midday and 45 minutes later Julie takes us into the Northeast Shipping lane…with Kim in the water it is obvious that the ebb tide is also gong to be weak, ahead us is the beach at Wissant but inevitable a relay that include breaststroke and butterfly is not going to be a fast crossing.
At 16:00 we enter the French coastal waters and continue on towards the coast…at 18:10 [Kim] lands on the beach just to the East of Cap Gris-Nez.”

So what in the world can be next?

The Daily News of Open Water Swimming thought 2010 was shaping up to be the most incredible year in marathon swimming history, but rumors and plans for even more incredulous marathon swims and relays are flying about worldwide. Stay tuned.