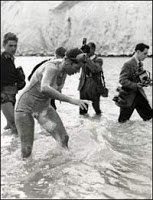 They both set English Channel records and they both set records in the Pacific Ocean: Greta did the first double-crossing of the Catalina Channel in 1958 and Ted did swam the Farallones Islands to the Golden Gate Bridge. Greta made a courageous attempt at crossing the Molokai Channel; Ted was declared dead after being pulled from his first attempt at the Farallones. Greta faced aggressive sharks in Hawaii as did Ted in California.

Nearly 50 years after their first encounters from Lake Michigan to the English Channel, they meet again yesterday in Southern California.

They shared laughs and old stories. They shared an intensity and love for life and all its challenges. Their respect for one another as competitive rivals and old friends was clearly evident. 50 years had gone by and, yet when these two interacted, it was as if time had stood still since 1961.

The two marathon warriors share a common rival – the unpredictable elements of the open water. They faced off against each other, but they also faced off against the elements. Bone-chilling cold. Brutally strong currents. Pitch-black nights. Long hours of pain and discomfort.

Ted explains on tomorrow’s Open Water Wednesday how he was able to withstand the cold, the bleak and the painful in the 1960s.

Greta understands exactly what he faced – because she was right there fighting against those very same elements.

Dial forward give decades and a new generation of swimmers takes to the open water.

Men like Vito Bialla, not born a swimmer, but born an adventurer.

While Ted was first – and last – man to swim from the Farallon Islands to the Golden Gate Bridge, Vito wants to enable others – empower others – to replicate Ted’s unprecedented feat.

Open water swimmers around the world will carry on the legacy of Greta Anderson and Ted Erikson – a legacy based on tremendous will power and a unquenchable strength of character.

In their own words, tomorrow’s Open Water Wednesday presents some of the best of the marathon swimming world.