Pierre Lafontaine (shown on left), CEO of Swimming Canada, will give the opening keynote speech on the Preparation of Athletes for the Open Water and the Organisation of Open Water Swimming in Canada. 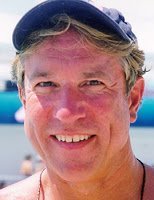 Dr. Jim Miller (shown on left), a FINA Sports Medicine Committee member, will give a technical presentation on the Optimal Hydration and Nutritional Needs of Open Water Swimmers.