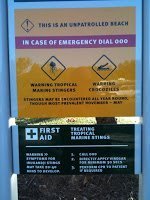 Most people see this sign and never think twice about getting in the water.

Other hard-core open water swimmers read this sign and wonder if there are any days where the stingers and crocodiles are less prevalent.

Then, there are a handful of open water swimmers who read a sign like this and think, “Voila! This seems like a great area for a challenge. How far to the other side?” Which camp are you in? 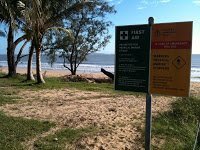 These signs are posted at Saunders Beach, about 30K north of Chris and Penny Palfrey. “Signs like this adorn most of the beaches where we live. The panoramic shot [on left] shows Rattlesnake Island in the background. I’m swimming from Saunders Beach to Rattlesnake next Saturday. Distance is 13-14K. This swim has never been done before,” explained Chris.

I don’t know why they call it Rattlesnake as we don’t have any in Australia. The uninhabited island is in Halifax Bay and is used for bombing practice by the air force. Marine life will be the main issue with this swim, and is probably why no one has done it. We are almost at the end of the box jellyfish season, but there was a near fatal sting here a couple of weeks ago. I’ll be wearing the full ying fa suit for this one.”