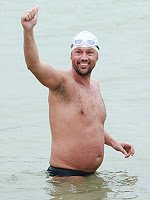 Out in the open water – especially while swimming in the middle of the Cook Strait, Molokai Channel, Catalina Channel, Rottnest Channel, Farallon Islands or anywhere in Cape Town, swimmers sometimes refer to sharks as ‘fish‘ or ‘The Man in the Gray Suit‘

There are other creative terms. Open water swimming slang heard around the lakes, lochs and docks in the channel swimming community includes channel fat or bioprene – referring to the oft-used methodology of gaining weight in order to acclimatize to cold water marathon swims.

Bioprene (noun): An abundant layer of hypodermis or subcutaneous tissue, that is mainly used for fat storage and a natural means to help tolerate cold water by marathon swimmers. The channel swimmer ate a box of donuts every morning in order to add to his layer of bioprene. [Origin: bio + neoprene or polychloroprene, a synthetic rubber that is used for wetsuits. Neoprene is the DuPont trade name for its brand of polychloroprene].*

Photo of accomplished marathon swimmer John van Wisse who is normally svelte, but who bulked up with some additional bioprene for his two-way crossing of the English Channel.