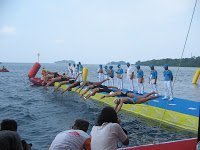 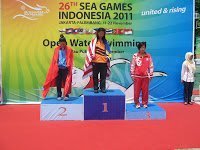 The open water swimming competition at the SEA Games XXVI/2011 began Thursday, November 17th on Putri Island among the Thousand Islands of Indonesia.

The women’s 5K championship kicked the festivities off in what can only be described as paradise. Under the watchful eye of Ronnie Wong, FINA’s Technical Open Water Swimming Committee chairman, veteran International Marathon Swimming Hall of Fame inductee Chris Guesdon, and a cadre of local officials, the open water swimming community descended upon Putri Island. The island provided a magnificent venue and idyllic tropical setting for the first open water swimming event conducted at the SEA Games.

The athletes and officials showcased the sport in the 29.5°C water and 30°C air temperature with light ocean breezes.

Heidi Gan of Malaysia, showing promise for the future, took advantage of swimming with the men and slowly drew away from the other women in the race. Thi Ngoc Bich Nguyen of Vietnam was second followed by Yessy V. Yosaputra of Indonesia in third.

The athletes will return to the waters off Putri Island on Saturday to compete in the 10K championship.