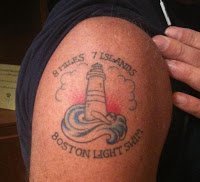 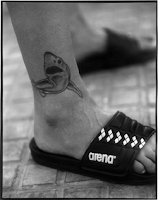 Watch an NBA game and it is rare to find a player without tattoos. But most open water swimmers leave their skin unadorned with the exception of sunscreen, Vaseline and lanolin.

However, there are swimmers with a number of ocean-specific tattoos.
John Daprato wanted to do the Boston Light Swim for a long time, “The tattoo is the original Boston Light Swim logo with variation in the colors, shape and lettering — also the swimmer has a more focused facial expression.” 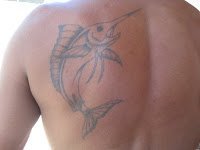 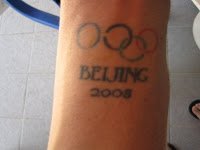 Brazilian open water swimmer Glauco Rangel has a large swordfish and Chad Ho celebrates his Olympic 10K participation.
Jeri Sisco of Washington has a colorful sea turtle tattoo on her ankle tattoo as a memorial of sorts for her husband. 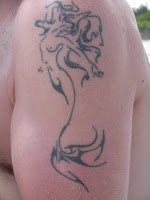 Bruckner Chase (left) has a colorful jellyfish and whale tails on his torso while Sebastian Fischer (right) said, “I have a mermaid tattooed on my left arm. I have always loved swimming and being in the water. 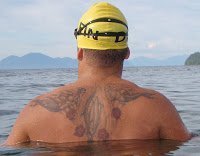 “The tattoos on my back are of my wife Michelle and my past, present and future in the ocean.”

Bruckner has faced swarms of jellyfish that have stung him unmercifully. “I swam through schools of jellyfish so thick it was like swimming in the exhibit at the Monterey Bay Aquarium. They were right in my face too.” But there are few more passionate ocean advocates than Bruckner.
World 5K and 10K champion and Swimming World Magazine’s Open Water Swimmer of the Year Thomas Lurz explains his tattoo, “I have the date from my father’s birthday on my left arm. I got it after his death. The tattoo [on the other arm] we did 12 years ago on our swim team for the German team championships and it means ‘Together we can do it’ or ‘We are strong together’. For example, my brother has the same tattoo on the same place because he also was on the team at this time as a swimmer. Now he is my coach, so it still fits good together. We were a good young team then.” 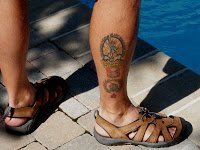 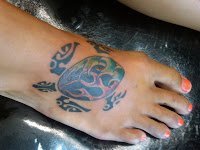 Jen King tells of her turtle tattoo, “Water and fire are in place of the turtle’s shell. The turtle, or honu in hawaiian, is a symbol of longevity.”

Jen explains, “On my back is a lotus flower with water around it. The lotus symbolizes overcoming obstacles and growing.”
“With the water around it means that I have the power to control the outcome of any obstacle and growth. Both of my tattoos have water in them because I’ve grown up near the water and it has made a huge impact on my life to be a swimmer, and it will always be a part of me.” 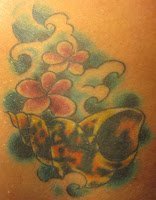 Lexie Kelly describes her tattoo, “I got this done on the north shore of Kauai [Hawaii]. To me, it signifies how important it is to focus on the small and simple and beautiful things in life. There is nothing more amazing than nature itself and the ocean – plumerias and seashells – happens to be something I am very passionate about since I have a strong love for swimming.”
“What better way to appreciate simplicity than spending time in the ocean.” 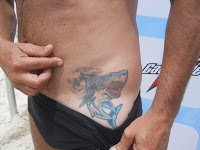 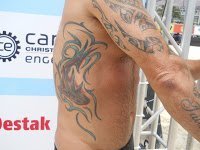 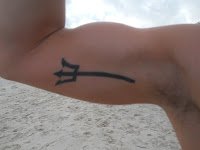 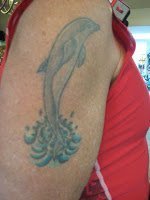 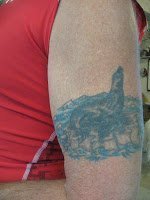 Dave Dunton, Managing General Partner of Try Cyclery, has two tattoos. “One is a seal lion that celebrates Seal Beach (California) and how much I enjoy living, working and swimming here. The other tattoo is a dolphin that I had put on after a bull dolphin wouldn’t let me swim into the Bay where I found out later there was a Great 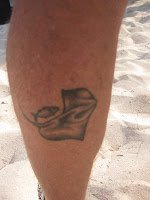 Mike Nie from the island of Cayman Brac has a stingray with a barb fish.

Upper photo of tattoo from the Outside Magazine.