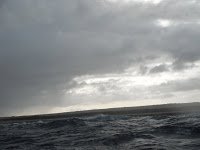 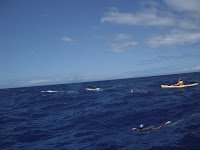 Marathon swimmers Penny and Chris Palfrey and Forest Nelson started their day just east of the Pacific Range Missile facility on the island of Kauai in Hawaii at 7:30 am and swam the 17.4 nautical mile (30K) Kaulakahi Channel to Niihau.

The trio was treated to dolphins at the beginning of the swim and then whales towards the middle of the channel. Chris explained, “Just after [our] feed, we were joined by four dolphins that came within 5-6 meters and hung around for a few minutes, just checking us out. They were magnificent to watch: streamlined, moving effortlessly and obviously inquisitive about the strange visitors. I could [also] see two white shapes way down deep – maybe 50 meters below us – which I assumed to be more dolphins. But then, it started to rise and I could make out the shape of the body. It was a humpback whale and then a second whale appeared. They could also clearly see us and seemed to be checking us out, either from below or to one side or another, coming in as close as 25 meters. They stayed with us until the next half hourly feed and were simply amazing to watch.”

Later three more whales appeared. “These came in closer still to the point where you could not only see their entire bodies, but also their eyes and some of their distinguishing markings. On several occasions, they came to the surface to breathe and Forrest and Penny took off to get closer to them. Forrest thought he may have been able to get close enough to even touch one. And even from a little further away, so these guys surface, looking at the body underneath the water and the massive shape which clears the water was one of those experiences which will stay with us for many years. In total, I think the whales drifted in and out of our field of vision, for about two hours.”

The trio finally succeeded in another Hawaiian channel crossing at 5:48 pm as the sun was sinking low on the horizon for a 9:18 crossing.