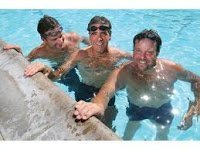 An engaging duo of marathon swimmers Chris Dahowski (on right) and David Hartmire (middle swimmer) of Swim 22 were both interviewed on the Simon Gowen Triathlon Radio Show.

Chris talked about his Catalina Channel swim and how he nearly quit a few times and was heading to his escort boat until his kayakers cut him off.

He explained his thoughts and actions throughout the 52-hour adventure and how, at the end, he was willing to walk up shreds of glass and rocks to finish on the Southern California coast.

Chris explained eloquently how tough the conditions that his teammate Mike Vovk (left in above photo) faced during his leg. It is especially compelling to hear how their 72-foot escort boat was pitched and rolled so much by the ocean swells that Mike had to swim far off of the boat because of the extremely nasty weather.

Scoll to 27:30 point in the Simon Gowen Triathlon Radio Show link here to listen to Chris and David.

Their colorfully descriptive interview with Simon gives you an idea how courageous marathon swimmers are and calls to mind the Chinese proverb: “Enough shovels of earth, a mountain. Enough pails of water, a river.”

But we think the proverb can be modified as follows, “Enough shovels of earth, a mountain. Enough pails of water, a river. Enough arm strokes, a channel swim.”