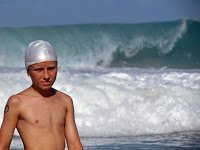 As the world goes round and the coastal areas of the globe get increasingly crowded, it is fascinating to learn how passionate people are bringing open water awareness and the joy of swimming to the next generation.

From Bruckner Chase in Amerika Samoa and Shane Gould in Fiji to Nejib Belhedi in Tunisia and Saka Acquaye in Ghana, these individuals are bringing tools, talents and treasures to those who have yet to learn how to swim.

Whether it is called Toa o le Tai in Samoa or Ouma in Tunisia, the spirit, resources and goals of these programs and individuals are strikingly similar.

While Chase, Gould, Belhedi and Acquaye are out in the forefront, there are numerous other programs worldwide – like the Centre for Injury Prevention and Research Bangladesh – that strive to teach swimming.

FINA open water swimming representative and long-time swimming advocate Dr. Khwaja Aziz from Bangladesh will speak about these programs at the 2012 Global Open Water Swimming Conference aboard the Queen Mary in Long Beach, Calfornia in September. He will explain how millions around the world cannot swim and how the threat of drowning remains a global threat.