OptimisSport is organizing the first new major international professional swim in Los Angeles County since the early 1990’s. In a part of the world where tens of thousands of triathletes and endurance athletes regularly take to the ocean and streets, it is refreshing to see a new marathon swim come on the scene.

The Distance Swim Challenge offers a 12.6-mile (20.7K) course that runs along some of the most famous beaches of Southern California. If the surf is pumping or the winds and ocean currents are running against the field, then the race will certainly live up to its name.

Internationally acclaimed athletes like Brendan Capell, a 25K world champion from Australia, and Ky Hurst, renowned as one of Australia’s greatest athletes, will compete against a field that includes other pros from around the world and people of every age and ability as well as a few stars from Hollywood. 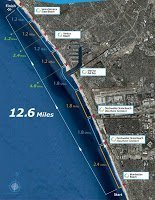 For triathletes who are accustomed to running in and out of the surf, the Distance Swim Challenge requires the 12.6-mile swimmers and relays to run in and out of the surf at 7 check stops on the shore. Hydration stations and cheering fans will help provide aid and motivation for the athletes.

Proceeds from the Distance Swim Challenge will help support the efforts of Heal the Bay, an environmental group to protect and maintain the health of Santa Monica Bay.

If you ever wanted to do a challenging swim while mingling with pro swimmers and the Hollywood crowd of Los Angeles, now is your chance.