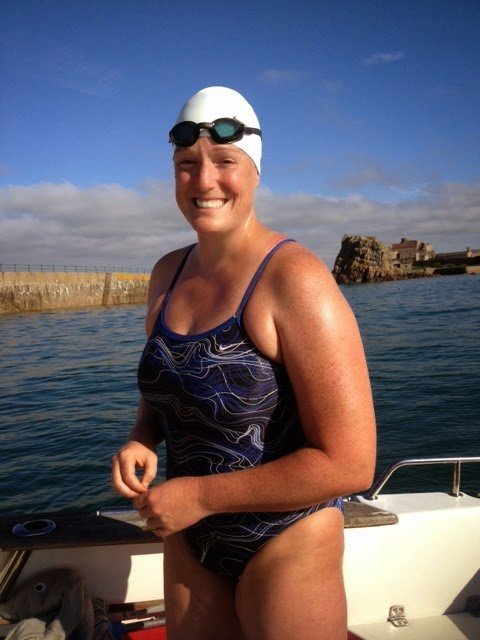 Shortly after setting the women’s record from Jersey to France in 6 hours 42 minutes, 37-year-old American Michelle Macy from Oregon broke the solo circumnavigation record around Jersey in the English Channel.

She really had to push it though as she swam faster than two renowned women.

The existing record of 9 hours 32 minutes was set in 2011 by American Julianne Galloway who had previously broke the standard that the Queen of the Channel®, Alison Streeter, had held for 22 years.

Macy finished in 9 hours 29 minutes as she was sandwiched between a kayak paddled by her training buddy Erin Stone and the escort boat piloted by Mick Le Guilcher on the Jersey Long Distance Swimming Club vessel Sea Swimmer 2.

“Also on her escort boat yesterday were Adrian Follain and 14-year-old Charlotte Vernon, both in training for their own Round Jersey solo swims next month,” said Sally Minty-Gravett who was Macy’s observer for both swims. “Michelle’s swimming pedigree is amazing. She was the second woman to finish the Oceans Seven last year when she completed her North Channel Swim in 9 hours 35 minutes. She is an amazing powerful swimmer and it has been a pleasure and privilege for the members of the Jersey Long Distance Swimming Club to welcome her into our community and watch her complete two challenges that we offer. She is also the first swimmer to come over and complete them in one ‘hit’.”

Macy’s talent and commitment as well as the navigational skills of her pilot play a large role in the record-setting performance, but so did the weather and tides in one of the world’s most renowned circumnavigational challenges. “There is also a great deal of luck involved and needed. Michelle had the best weather and conditions for both swims,” recalls Minty-Gravett.