Oscillating Between Warm And Cool In The Pacific Ocean 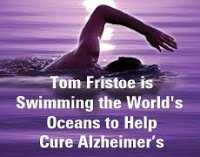 Similar to hundreds of other channel aspirants around the world, Tom Fristoe, founder and CEO of TeamUnify, completed his mandatory 6-hour swim before his English Channel attempt later this year.

Fristoe, who is attempting a 34-day completion of the Triple Crown of Open Water Swimming, did his practice swim in La Jolla Cove near San Diego, California. A bit tired after his effort in the 60°F ocean, he keep a strong pace throughout only dropping a stroke or two per minute from beginning to end.

His Triple Crown attempt is a charity effort to raise money to help cure Alzheimer’s Disease. His trio of swims kicks off on June 23rd with the Manhattan Island Marathon Swim and is then followed up with a Catalina Channel attempt on July 14th, and then the big one in the English Channel on July 24th if all goes according to plan.

While the Manhattan Island Marathon Swim has more predictable tides and current flows, the weather conditions in the English Channel are much more unpredictable.

But with his English Channel attempt scheduled only ten days after his Catalina Channel swim, his effort in the Catalina Channel may be the fulcrum in which his ultimate success resides. Since he will have to conserve some energy for his international travel from Los Angeles to London and especially for his final swim of the Triple Crown, one key will be how much energy he will expend in the Pacific Ocean.

As was experienced by swimmers in the Catalina Channel and up and down the California coast last year, the Pacific Decadal Oscillation (PDO) is currently in a long-term cooling phase. PDO is a naturally occurring fluctuation of the Pacific Ocean’s water surface temperatures that appear in cycles every 20 to 30 years. In other words, the water is getting colder and may remain cooler over the next 2-3 decades.

Some scientists believe the Oscillation switched to a significant cooling trend beginning in 2008 when the water temperatures in Southern California were at least 4°F below normal.

Fristoe will certainly find out what the Pacific has in store for him on his Triple Crown attempt on behalf of Alzheimer’s Disease research.