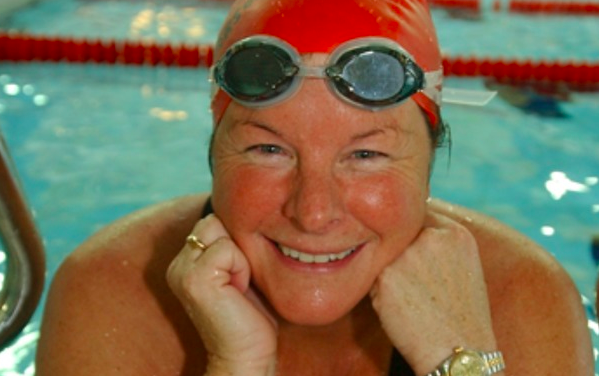 Youth is valued in Hollywood, especially among females. But Dorset is a long way from Hollywood.

Filmmaker Scott Trotter is looking for a female cold water swimmer over the age of 50 to be subject of a short film this month.

If the nominees for the 2018 World Open Water Swimming Woman of the Year (listed alphabetically below) are any indication, there should be many uniquely qualified and personable candidates for the film:

Sally Minty-Gravett MBE [shown above] not only is a channel swimmer and Guinness World Record holder, but she recently started intensive training in ballroom dancing and competed in BBC Jersey’s Strictly Come Dancing.

Friend Jaimie Monahan reported, “She ended up winning the whole thing and raised lots of money for charity [with] her energy, skill, and enthusiasm on the dance floor, just like in the open water. She is such a great ambassador in everything she does.”