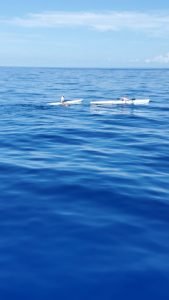 In the 20 Bridges Swim around Manhattan Island in New York, the swimmers fly down the Hudson River often swimming faster than walkers, joggers, runners and even cyclists.  The swimmers are aided by the fast-moving Hudson River during the last stretch of the 45.9 km marathon swim.

They are tired, fatigued and sore, but their swimming speed is undeniably fast.

And so was Pablo Fernández of Spain today in the Century Swim in the Gulf Stream off the coast of Florida, a current-assisted 100 km solo swim.

Fernández has previously swum in the fast Agulhas Current along the KwaZulu Natal Coast in South Africa during the Madswimmer’s Great Shark Swim, but nothing was like today’s warm, salt water open water swim. 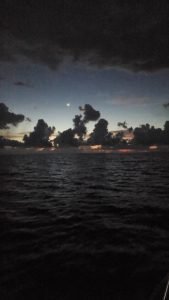 Fernández‘s Century Swim in the Gulf Stream covered 100 km in nearly a straight line, starting at 4:02 am this morning with a solid 5.5 km current pushing him northwards.

But within an hour, his oceanographer team reported that the prevailing current was already at 6.5 km per hour.  “His team had previously predicted and hoped for a 14-hour swim covering 100 km,” said Steven Munatones. “Fortunately, the early 6.5 km per hour push in the Gulf Stream got Pablo off to a great start.  His planning team really did a great job identifying the ideal location off Jupiter, Florida.

Robert Strauss, part of the observer team from Guinness World Records who was on his escort boat, said, “The first two hours were great and the weather was perfect right from the start. Pablo told us on a feeding break that it felt like he was swimming in a pool.  The current increased to 7.1 km per hour in the fourth hour.” 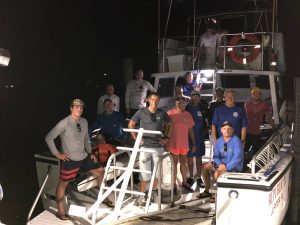 The officially recorded 100 km ocean swim was 12 hours 21 minutes 14 seconds that was reported by the Guinness World Records team at 7:46 pm New York time.  His goal was to set the fastest solo non-stop ocean 100 km swim in history.

He did it – with a great team around him.

More information, photos, videos and GPS data to follow as the team heads back to dock and home.