Spanish entrepreneur and adventurer Pablo Fernández Álvarez participated in the Great Shark Swim, a planned 100 km charity swim organized by Madswimmer in the Agulhas Current along the KwaZulu Natal Coast in South Africa.

Unfortunately, the team and Fernandez’ swim was halted after 28.24 km and 9 hours 3 minutes due to stings by blue bottles in December 2017.

But Fernandez has not given up on his 100 km swim dreams.

Fernández will attempt to swim the fastest 100 km ever swum in the ocean. His window begins next Monday while he waits for optimal conditions in Miami, Florida.  Fernandez will swim off the eastern coast of Florida in the United States in order to gain advantage of the Gulf Stream. 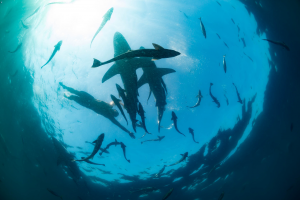 Along the southeastern coast of Florida between July 29th and August 1st, his goal is to swim 100 km in about 14 hours in a current-positive attempt. “He will take advantage of the Gulf Stream to attempt to set a Guinness World Record for a solo assisted sea/ocean swim,” said Steven Munatones.

“Pablo will depart on board a boat from Jupiter, Florida off the coast.  The location for the start will be at east of Jupiter where the Gulf Stream current flows the strongest. There, he will begin swimming heading north with two kayaks accompanying him and assisting with feeds. On his other side, there will be an escort boat with his team members: two paramedics, a photographer, two extra kayakers, the crew, and two observers.  Jennifer Clark’s Gulfstream will transmit real time data to the boat to use and maintain course.

During the swim, Pablo will only wear a cap, goggles, swim shorts and will take the Spot Gen 3 GPS that will automatically send messages with his location. He will also wear Shark Shield bands on both his ankles and wrists and will carry on the boat Sting No More to treat jellyfish stings.”