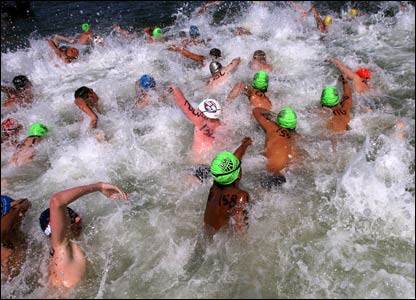 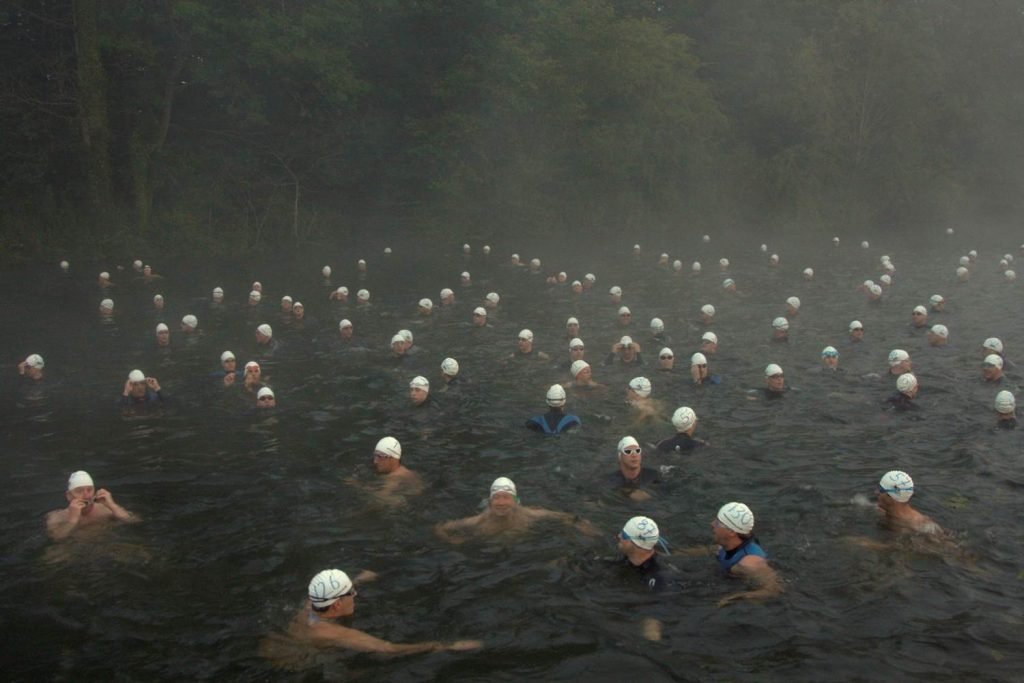 The start horn goes off and hundreds of swimmers and triathletes enter the water.

Like schools of fish, the humans swarm all over the course in close proximity to one another. The athletes are so close to one another that they frequently bump, hit, crawl, pull, bang into, bounce off of, slap, jam and smash into one another.

Their collective behavior reminds observers of the swarms, herds, shoals, packs, throngs, colonies, flocks, and hordes of animals seen in the natural world. For some reason, the independently-minded humans, so individual with divergent personalities onshore, somehow automatically meld themselves together into massive schools of oneness.

Certainly there are occasionally a one-off swimmer or a triathlete swinging wide of the pack or taking off in a separate course, but in large part, the chaos on land before the start is forgotten and the human athletes of different character suddenly turn into one pack with a united goal.

They aim for the first turn buoy…together. They head off towards the distant finish into a pack…together. They are all thinking of different things…their stroke, their pace, their competition. But they all tend of bunch together in a cohesive, unspoken aligned cluster whether they are triathletes cloaked in black neoprene or open water swimmers that dot the ocean surface in multi-colored swim caps.

Before the start of a triathlon or an open water swim, the athletes mill about hydrating, talking, stretching and doing a myriad different activities all at their own pace and own volition. There is no set pattern of preparation; there is no pre-determined order of activity afterwards. But once swimmers and triathletes hit the water, they seem to transfer to a single, uniform one-mindedness where every swimmer or triathlete matches their pace and direction to the individual to their left and right, front and back.

As every swimmer instinctively matches their own pace and direction to the other swimmers around them, the village of individuals onshore becomes organized into a homogeneous pack. Even without a spoken plan of action, the humans quickly take up a synergistic activity without verbal instructions. The body language of open water swimmers – freestyle strokes, sighting forward and physical contact – is enough to transfer them into a bevy of athletes.

It is our observation that physical contact is especially important to transfer information from one swimmer to another in the absence of verbal cues.

As the swimmers hit arms, touch feet, and bang bodies, this creates a phenomenon that enables disordered humans into a unified group. But even without physical contact, the whitewater splashing of their kick, the swinging of an opponent’s arms, and the potential to be hit by the feet and elbows of other athletes are sufficient create this pack phenomenon in the open water. That is, there is a natural magnetism that leads to this automatic bonding and cohesive collectivism in the water between people of both genders and of all ages who do not know each other’s names, abilities or personal histories.

This cohesive collectivism in lakes and seas occurs even if none of the individual swimmers can see the goal, or the distant turn buoys. As long as one swimmer in the lead heads off in one direction, the other athletes generally follow, largely without exception. At the very core, it seems that each individual swimmer believes there is power in numbers and that safety is enhanced as part of a whole instead of swimming off as an individual. 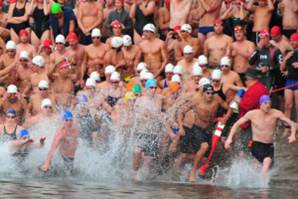 The natural fears and worries that humans have when swimming in open bodies of water is a huge driver of this collective behavior. No one wants to swim into a jellyfish or see a shark. Even swimming into a floating plastic bag or into a cold patch is acceptable as long as there are other swimmers around them. But take an unexpected encounter with flotsam or swimming into a current or rough water, and nearly every athlete prefers to do this with others rather than a solitary act. There is safety in numbers, so goes the train of thought.

On automatic pilot, every swimmer is out in the open water keeping an eye out for others and adjusting their pace and direction to match the field. That is, when it comes to the fear or worry about safety, each swimmer would rather be right next to another swimmer rather than off in the distance alone and unprotected.

The wisdom of the crowd is also an influence over everyone. That is, when it comes to deciding upon a particular direction or course of action, when all the other athletes are swimming on a particular course, then each individual swimmer independently decides that the pack’s collective plan of attack must be correct – or at least the course that does not put them at a disadvantage over their fellow athlete. The Many Wrongs Principle is seen time and time again in the open water. The Many Wrongs Principle predicts that group cohesion can cause humans such as athletes in an open water swim or triathlon to navigate more accurately than single individuals. That is, the group’s navigational IQ is greater than any single person’s navigational IQ. The group navigational accuracy is increased with group size and is true when individual directional uncertainty is high – which is usually the case in triathlons and open water swims especially when the conditions (such as in an ocean, sea or river) are dynamic and ever-changing.

The competitiveness of the individual swimmers also has a strong influence on why packs form. Triathletes and swimmers understand that drafting enables them to swim faster with the expenditure of less energy and effort. So instead of forging their own course, most athletes prefer to draft alongside or behind another swimmer. Swimming within the wake of another swimmer is simply easier, faster, and more efficient.

No talking, no pointing, no plotting…together with collision avoidance and directional uncertainty in a dynamic environment leads inevitably to pack swimming in the open water, partly due to the natural fear and competitive nature of athletes enhanced by a mutual unspoken trust vis-a-vis each and every swimmer in the field. But, in fact, there is a profound amount of information being relayed among the swimmers even without words or a pre-determined plan. It is the positioning, pacing and buoy/course layout that encourages the field to bunch together.

The packs that form may be asymmetrical or not. The packs may be elongated or oval. They may consist of athletes drafting one after another or consisting of 3-wides, 4-wides or 5-wides of swimmers. But pack swimming is inevitably created.