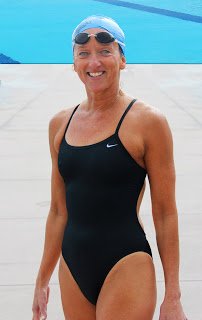 “As a swim angel, we buddy up with a swimmer who either hasn’t swum a race before or who needs someone there for support,” explains Pam Lazzarotto from Long Beach, California. “We swim along beside them sighting and cheering them on. It is so enjoyable and fulfilling to see someone complete their first ocean swim.” Lazzarotto served as a swim angel at today’s Nantasket Beach Swim that was held under unseasonably rough conditions. “I swam with Julie Hilson, a cancer survivor. She was a bit apprehensive at first, but once we got passed the first turn buoy the choppy water subsided. She cruised along quite easily to the finish,” said Lazzarotto (shown on left) of the charity swim organized by Swim Across America this morning. Under the leadership of Kitty Tretreault the longer (1-mile) event was cancelled due to safety reasons. But the swimmers and donors generated over US$82,000 in donations for cancer research. Copyright © 2008 – 2013 by World Open Water Swimming Association