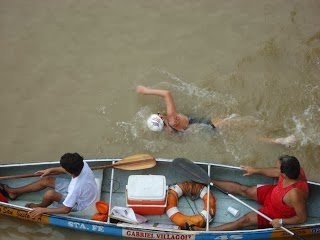 It is held annually in February under extremely competitive conditions, attracting the fastest marathon swimmers in the world, down a river with varying currents and flotsam. Tens of thousands of spectators line the course in an extremely festive atmosphere as part of the FINA Open Water Swimming Grand Prix circuit.

As the race flows down the Paraná River (Spanish: Río Paraná, Portuguese: Rio Paraná), a river in south central South America that runs through Brazil, Paraguay and Argentina for 4,880 kilometers (3,030 miles), its swimmers are reminded of the Tupi language phrase: para rehe onáva.

The name Paraná is an abbreviation of “para rehe onáva” which means “like the sea“.

Photo shows Alma Luques racing down the Río Paraná from Santa Fe to the city of Sao Tome in Argentina in the Paseo Del Saldo.